Skip to primary navigation Skip to content Skip to footer

The Mulino di Saturnia Waterfalls are one of the most evocative and fascinating places in the Maremma, and certainly among the most beautiful hot springs in Tuscany. 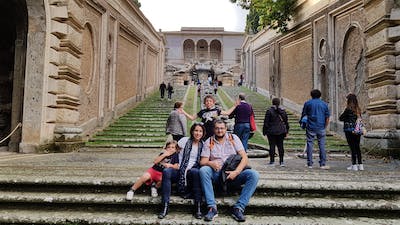 Civitavecchia Excursions is a MyLoveItaly Travel & Experiences brand dedicated to unforgettable shore excursions from Civitavecchia Port. Our tours include pick-up and drop-off at the harbour, round-trip transfer, ticket entrance fee, and light lunch or food tasting. Join us on a tour to Rome, surroundings Rome (Tuscia), or Tuscany today!

See all the highlights of Rome in one day on this full-day tour with an experienced guide. The Sistine Chapel, the Basilica of San Pietro and the Colosseum!

This tour allows you to admire an infinite number of masterpieces such as the ‘Pietà’ and the ‘Last Judgment’ by Michelangelo and splendid works by Bernini, Raphael, Botticelli, and Perugino.

Before the Romans: UNESCO site of Tarquinia

Discover the Etruscans on this guided cultural tour and visit the city of Tarquinia, a UNESCO World Heritage Site. Explore the ancient Etruscan necropolis with tombs painted over 3000 years ago.

Take walking tour of Civita di Bagnoregio, the ‘dying city,’ which is slowly moving away from where it stands and will inevitably disappear when the final pieces crumble in the spectacular Valle dei Calanchi.

Enjoy a day dedicated to the discovery of two pearls of the Tuscan archipelago: the island of Giglio and Giannutri.

The Tarot Garden is an artistic park in Tuscany created and designed by the French-American artist Niki de Saint Phalle. It is populated by statues inspired by the figures of the greatest arcane tarots.

We recommend people wait to embark or desembark for cruises, and have time at disposal to discover Civitavecchia’s surroundings.

See Why Our Clients Love to Explore Italy With Us!